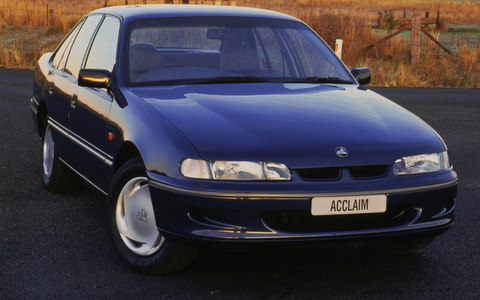 The VR Series was more than a simple facelift of the VP Commodore, the only body panels being carried over were the roof and the door skins.

The shape was now softer and more aerodynamic, and with additions such as the first Australian built car to offer a driver’s airbag, the VR was unquestionably superior in every department over previous iterations.

There was also a new electronic automatic transmission, and a new engine/auto computer module (IPCM 6)  boasting a larger capacity memory module which proved considerably faster than the previous model.

Now standard on all models were the body computer, power mirrors, tachometer and gas bonnet struts.

There was a new security system, and some minor improvements to the V6, making the engine both smoother and marginally more powerful, while reducing fuel consumption.

The interior benefited from a softer looking dash and instrument panel, a smaller diameter steering wheel, while the VR was now fitted with a tilt/telescopic steering column adjustment.

The VR Series II was introduced in September 1994, and boasted heaps of improvements including

Most revered (apart from HSV models) was the SS, naturally enough fitted with the 5.0 litre V8, although you could option it with a HSV enhanced unit good for 185kW. The SS featured an integrated brake light within the rear wing, along with an aerodynamically designed rear bumper. The grille was blacked out, and featured red highlights, while fog-lamps were integrated into the front bumper.